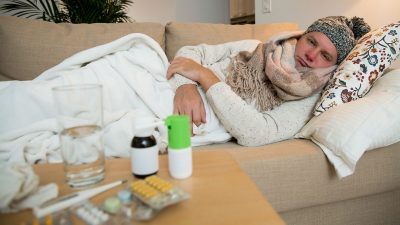 For a while now, the expression ‘man flu’ has been controversial. Many men say their illness is real, while many women say they are just being weak. But why is it that some men seem to suffer, or complain, more when they get sick than women?

A recently published study may have the answer. Can science prove that men really do suffer more, or do they just moan instead of getting on with it? Dan and Neil teach six items of vocabulary and discuss the issue.

In a survey conducted by Nuts magazine that asked its readers how long they took to recover from a cold or flu, where women put an average of 1.5 days, what did men put?

Listen to the programme to find out the answer.

the sniffles
a cold (informally)

soldier on
continue despite difficulty

man flu
the situation where a person, often a man, tends to complain and exaggerate a small illness such as a cold

symptoms
feelings of illness caused by a disease

Do you have flu symptoms? let your Teacher at Skype Class help you with further vocabulary.